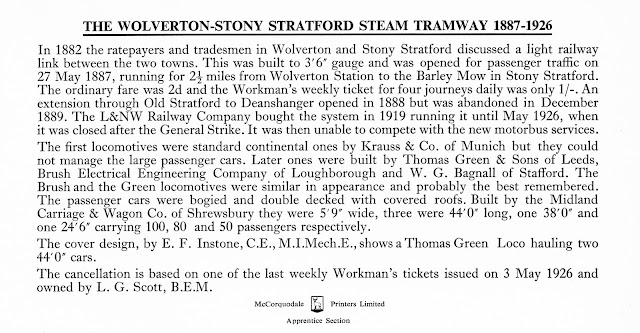 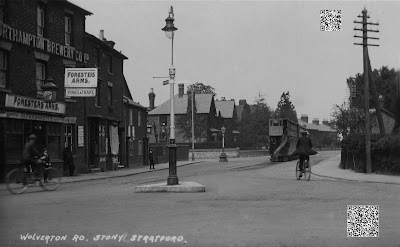 Stony Stratford a market town developed along the old Roman Road Watling Street with many staging coaches halts for this town including The Cock and The Bull ( a cock and bull story ) originating from stories told in one establishment and the elaborated with embelishment over the road. 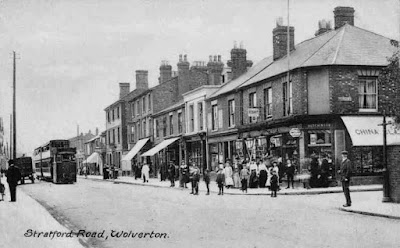 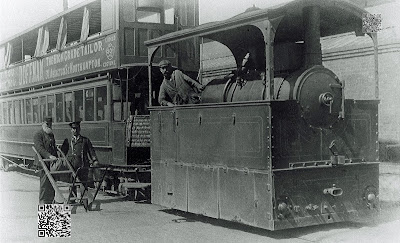 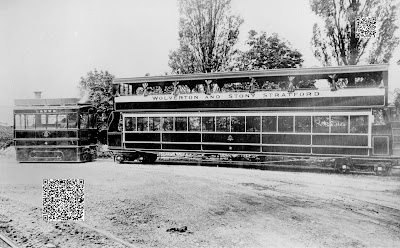 Wolverton / Stony Stratford Tram Date Unknown. From Original negative (J.A.Peden)
100 seater car being pulled from the LNWR carriage department on the depot fantail out of the Stony Stratford sheds. 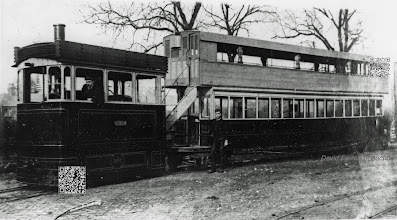 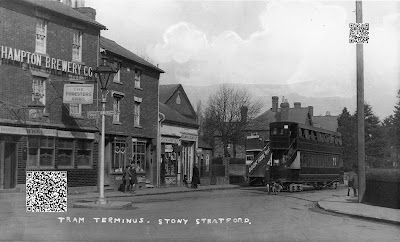 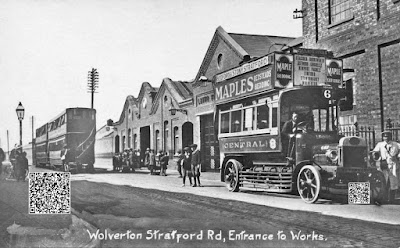 The demise of the trams when motorised busses were increasing by number between the two towns. In the final days it would be common for a motorised bus to be scheduled for a tram run. This picture taken after 1914 When the London General Omnibus Company started running services from Bedford through Newport Pagnell to Wolverton and Stony Stratford and starting to become popular for the workers. Wolverton Tram and Ex Central Leyland Bus Card-un-posted.

Ex Central Leyland Bus, Bedford to Newport Pagnell return. Outside the Railway Tavern opposite Station Road Newport Pagnell. The Bus company laid on local trips to and from Stony Stratford to Stantonbury that also had an effect on passenger short fall on the trams. On the declaration of War with Germany the Government War Office requisitioned the bus fleet and this gave the tram company some leeway and managed to keep the rout running during the war years. 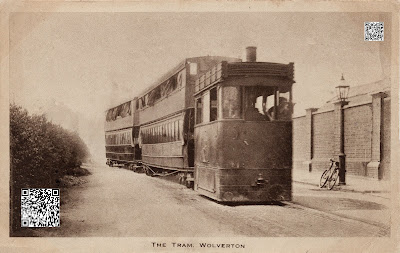 The tram line was installed in the middle of the roads at Wolverton and Stony Stratford. When tram left these towns the rails were installed on the left side of the road. Here the Tram is approaching Wolverton moving into the centre of the road. Interestingly a motor vehicle accident occurred where the tram rails crossed from one side of the road to the other midway of the two towns.  Post Card un-posted (C.F.P.-N.)

Dear Auntie and all,
Received CH – thank you very much found all well at Wolverton and Bletchley. I am looking forward to Wednesday to see Gracie to know how you all are,   Love to all Connie   Ask Uncle if he knows this.

Wednesday 9 August 1916
Having a Glorious time here, most lovely country, wish Loura was here with her like we could go for a lovely ride. Sorry to hear from Mother that Mr Sidebothan was so poorly so hope he is better also yourself. Had two letters from George since I came here I do not know what Mable’s address is so I cannot write. I expect they are having nice weather as well as I. Kindest Regards Sylvia.

18 July 1918.     Dear Friend, I received your post card. Sorry to here you are having bad weather but its not so grand here but our holidays are nearly over. So best of love and luck. Yours ever Ethel. 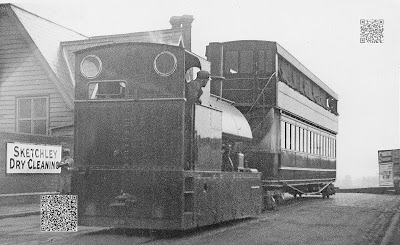 W.S.S.T No.1 Outside Wolverton Station 23 May 1925  It is possible the 100 seater car could be being pushed along to the corner with a sharp left hand corner down a steep gradient to Newport Road where another reception yard and reversing triangle was. (Ken Nunn Collection) 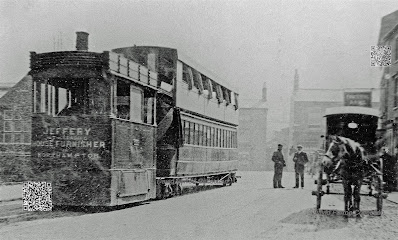 Tram outside School and Foresters Arms

A few years past with smaller bus garages posing up after the closure of the Tram way the garage at Stony Stratford operated by a fellow Tillings company. Eastern National was transferred to United Counties. The company built new garages in several towns, a new headquarters, with major engineering workshops. The expansion of the services in Stony Stratford led to a new large facility to replace the two small garages in the town. Construction commenced in 1954 with operations starting in July 1955. In December 1960 another garage was built in Bletchley this replaced the small garage in Fenny Stratford. 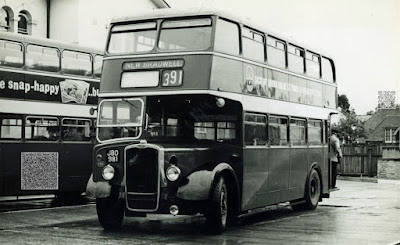 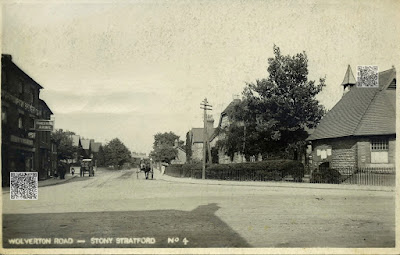 Early post card un-posted with tram rails seen in the road It is not sure if this photo was taken after closure. Refurbishment to the tram rails between 1907 to completion in 1910 showing tram rails terminating here. However the section into Watling street was never carried out. The Watling street section was abandoned due to the increasing traffic usage. The Foresters Arms became the terminal for trams where a new run round loop was installed. 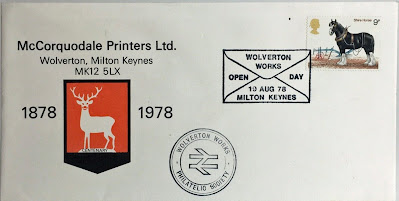 I arrived safe, they got the lodging for me very nice place & all nice girls to work with. Write more next time.   Yours Daughter.
7 Prospect Road Stony Stratford. 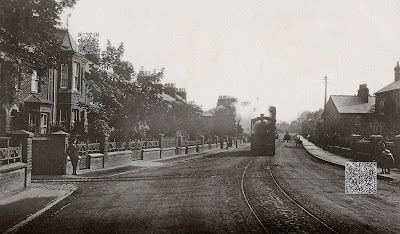 Tram arriving on Wolverton Road Stony Stratford approaching terminus points in the road. To the left is the entry to the tram depot it has passed the exit where it formed a triangle as a spur to the tram sheds.  post card written but not posted.

Silver Street Cheddar
Dear Noel, This is the tram we went to Stratford in and did not walk often all because it looked so much like rain so we went by the tram
(a bit of German about this one) with love from Gertie. 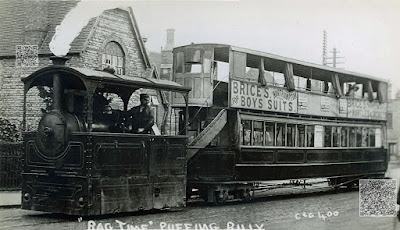 Wolverton Road Stony Stratford note smoke added to photo and the "RagTime" and "Puffing Billy" have no connections to the steam tram written below in photo other the time and date of the1900. An owner, an amateur photographer of a Barber shop in Wolverton was producing post cards. One of the tram conductors who served many years for the tram company was known by Little Billy Newton only standing at five feet tall and very well known in the community. Whether this has any bearing to the caption one will never know. 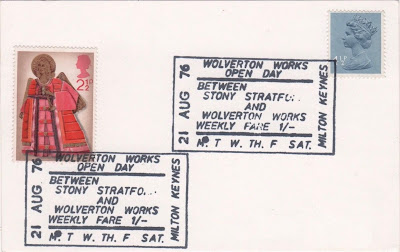 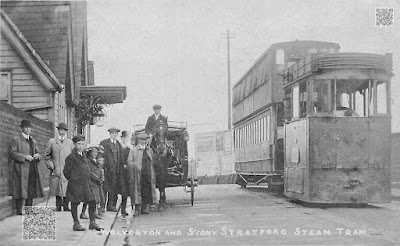 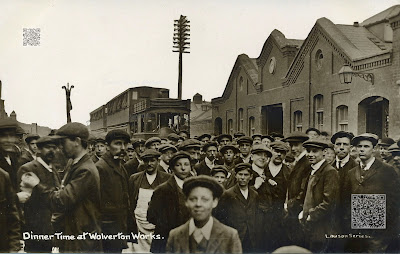 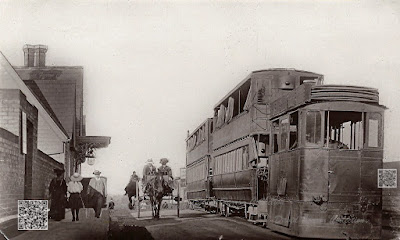 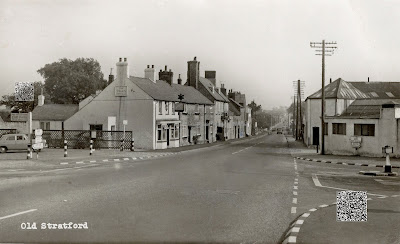 Old Stratford. Tram waiting room and workshops would have been on the right. The Tram would have continued on from here to Deanshanger 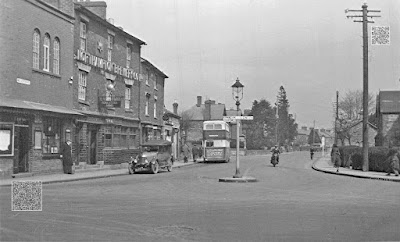 The changing face of transport c1933. Waiting for passengers could be a 1931 Leyland Titan TD1. , In 1921 The United Counties Omnibus & Road Transport Company, as it was originally known, was formed in 1921 to take over the operations of the Wellingborough Motor Omnibus Company, founded in 1913. 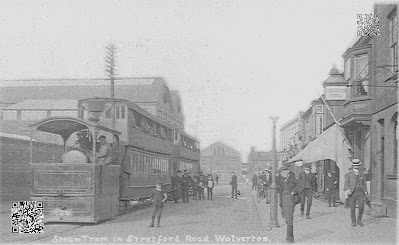 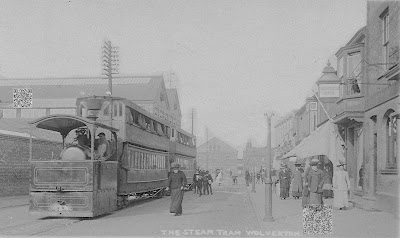 Two Photo's taken at the same spot at different times. Stratford Road outside the Wolverton Works 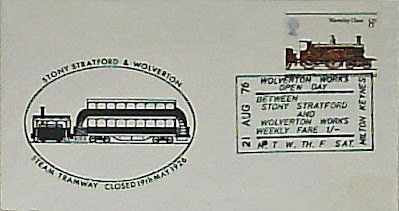 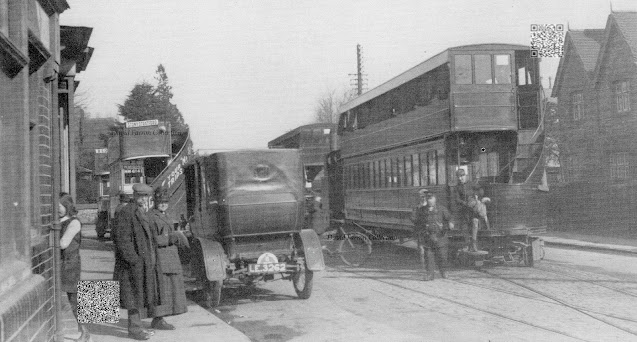 "Nearing the end" Billy Newton the long serving conductor descends from the tram at Stony Stratford with the 'General' double decker buses taking over the shuttle to and from Wolverton and beyond. 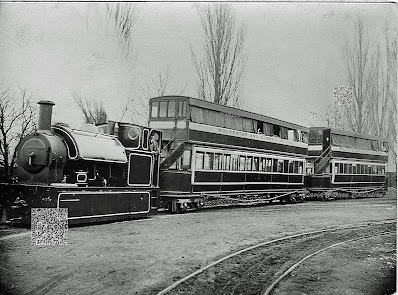 An official gloss photo possibly taken at the tram depot at Stony Stratford with a Bagnall engine at the helm with two 100 seater cars. Date Unknown. (David Farron Collection) 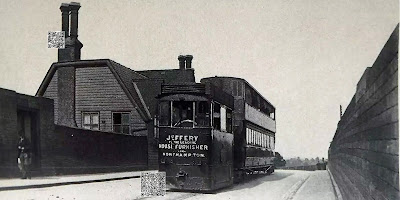 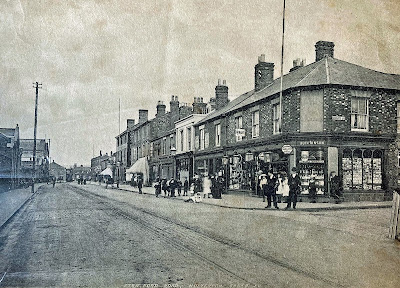 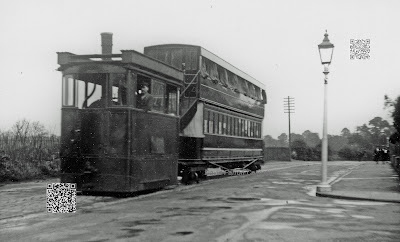